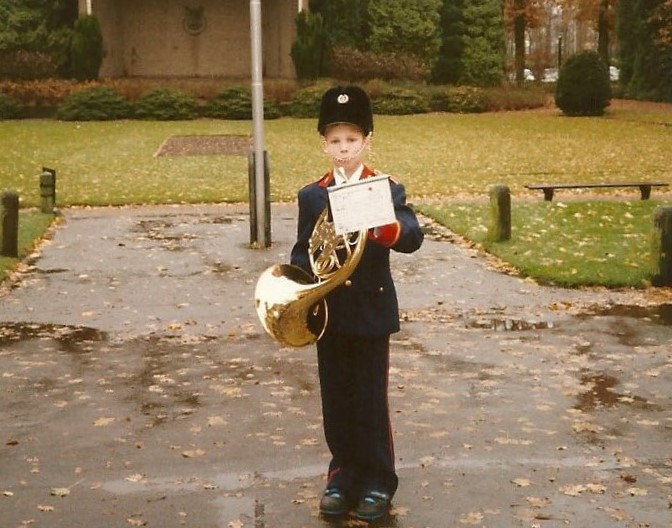 Born in Rijssen in the region of Twente in the Netherlands, on May 1979 Erik started his musical career at 6 years old at the local musicschool with the flute. After making a switch to the trumpet at 'muziekvereniging Wilhelmina' he started lessons with the Horn from the age of 9 years. After 10 years of lessons Erik got his D-diploma at the KNFM, meanwhile he finished High school and Intermediate vocational education, before he decided to start studying at the conservatory.

The single horn is equiped with three or four valves. The three main valves, which are operated with the pointer, middle and ringfinger, are there to fill in the holes between the natrual tones, by setting the horn in a lower tuning combination. The first valve lowers the horn a whole step. In other words, the horn tunes from B-flat to A-flat. The second valve, lowers the horn half a step. So the horn is tuned from B-flas to A. The third valve lowers the horn one and a half step. This means the horn is tuned from B-flat to G. The fourth valve wich is operated with the thumb, can give several lowerings of the horn. This is depended on the tube length and typical lowerings are half a step, a 'stop' step, ore two and a half step.

The dubbelhoorn is the default horn instrument in a symphonie orchestra.

De Alexander 103 is a combination between a F and a B-flat horn. With the Thumb valve you can switched between both tunings.

The Paxman followes the same principle as the Alexander 103, but combines the High F and the High Bb horn.

From 2005 onward, Erik has been active in the world of musicals and has participated in the productions shown below: